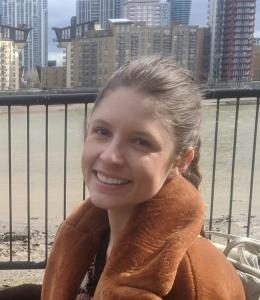 Michelle Liebst is a historian of labour and religion in East Africa. She holds a PhD in History (University of Cambridge, 2018), and has taught at the Department of African Studies and Anthropology (University of Birmingham, 2018-2019). From April to September 2020, she will be a Postdoctoral Fellow at IASH, working on a labour history of church-related developmental projects in East Africa. Her book, Labour and Christianity in the Missions: African Workers in Tanganyika and Zanzibar, 1864-1926 is due to be published by James Currey in January 2021.

Current research
Michelle's project is called 'A Duty to Develop: Christianity and Development in East Africa since 1964'. The aim is to interrogate the relationship between two major themes in global and African history: the spread of Christianity and the deepening political importance of development. It does so by focusing on two kinds of organisations: churches, too often considered exclusively for their religious significance, and NGOs, which are widely identified as agents of ‘development’. Popular conceptions of ‘development’ are closely intertwined with secular western power in the form of NGOs and governmental aid, rather than churches. However, scholars have increasingly observed that, though NGOs are expected to operate in a secular fashion, historically they were often built upon the ideological and physical foundations of Christian missions. This observation raises an apparent paradox: that development, a symbol of science and this-worldly improvement, borrows heavily from other-worldly faith. The growing literature on contemporary Christianity and development often concentrates on contemporary Pentecostalism. It is essential that we put the relationship between Christianity and development in historical context by considering the roles of long-standing mission churches.

Title: Labour and Christianity in the Mission: African Workers in Tanganyika and Zanzibar, 1864-1926

This book project explored the livelihood trajectories of mission followers and dependents and contributes to work exploring the socio-economic significance of missions, humanitarianism, and the relationship between faith and development. Crucially, it uncovers the important role missions played as employers, which has been largely overlooked in histories of mission. Focussing on the Anglican Universities’ Mission to Central Africa (UMCA), the findings expose how missionaries, as some of earliest examples of Europeans who tried to control African labour, supported and undermined certain livelihood trajectories. Despite the abolition of slavery in 1897 in Zanzibar and the fact that the UMCA was closely linked with the anti-slavery movement, ex-slaves continued to struggle with their social status. Ex-slaves and (ex-)slave descendants tended to be socially marginal and therefore more likely to encounter missions, which offered them various forms of relationality and dependency, not all of which were desirable.

‘Routes to Emancipation in East Africa’ in the Oxford Encyclopedia of Slavery, Slave Trade, and the Diaspora (ed. Martin Klein). Invited to co-write with Prof. Felicitas Becker, submission due 6 May 2020.